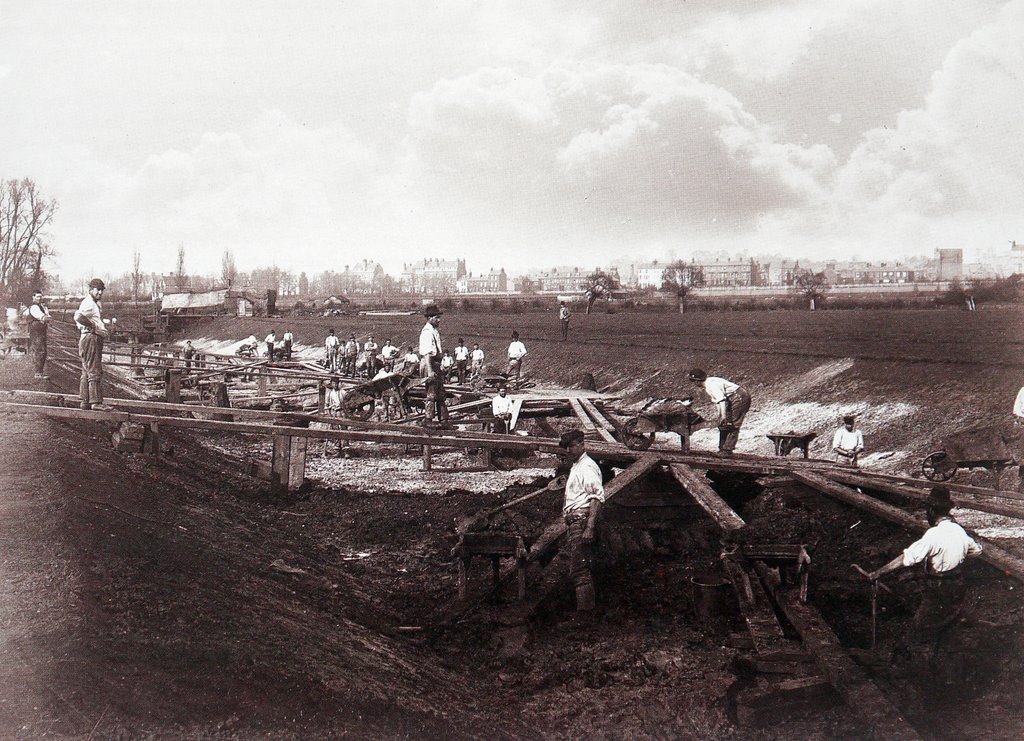 Aston’s Eyot is the island marked ‘Hormer’.
Note that the Cherwell New Cut has not yet been dug. When it was dug in 1884 it created the triangular island north of Aston’s Eyot on which many of the University boathouses have been built.

Aston’s Eyot and surroundings in the 1940s: edited from recollections of three East Oxford and Iffley Fields residents in the late 1940s, who prefer to remain anonymous.

“The Eyot was used for cattle grazing at around the time that the post-war rugby pitch failed, and the cattle, from recollection heifers and black bullocks of a breed rather like Friesians, belonged to Bill Titcomb, a butcher working for Butterfields in the Covered Market who lived in Parker Street (1)and also kept a large piggery inside what is now the scrapyard site. The town rubbish dumping on the Eyot during the late 1940s was covered over with a layer of clinker, and this was covered with a thin layer of top soil, and then this very strange soil profile was left to develop through natural succession. No one remembers whether it was ever planted or seeded, or whether the natural vegetation was just allowed to colonise it, but for years much of it was just a bare clinker surface, subject to informal dumping by local residents, to whom it was generally known as ‘The Dumps’.  The linear divisions evident in the 1945 aerial photo [on Google Earth 5, see maps tab] represent the successive ‘front lines’ of the dumping activity moving successively westwards towards the river where the most recent dumping took place, or ‘land reclamation’ as this ruination of the Thames flood plain was then known. The active zone for tipping was often delineated by a simple wire fence, which would scarcely be visible on these degraded photos.

[The period when the Eyot was used as a rubbish dump is a blank in its history, about which almost nothing was written. After the 1939-45 war, when dumping finally ceased, the area was still an unloved wasteland, only gradually developing the vegetation cover we see today.  After part of it hosted military training in the war years, a grassy part was used as a rugby pitch, but had to be abandoned due to broken glass coming up through the sward (see History tab).  The account below is largely as written by one former resident, with additions from two others who remember the area in the late 1940s and early 1950s – Anthony Cheke]

Before the scrapyard was established, that site was known as ‘Harry Cox’s Farm’, or ‘Cox’s Field’, Harry Cox being a renowned chimney sweep from East Oxford, who lived in Hurst Street [at No.32].  He kept a great variety of Large White and Saddleback pigs, Rhode Island Red, Black Leghorn and Bantam poultry, Muscovy ducks, rabbits and Japanese Pheasants on that site, in amongst an extensive overgrown apple and plum orchard (2) , and an informal ‘mausoleum’ for old vehicles which ranged from a stage coach to vintage tractors, and in addition to sub-letting parts of the site for private and commercial vehicle garaging.

After Harry Cox and his wife died, the field was left to their younger son who promptly sold it to Joe Trinder (3)who established the scrapyard.  The pig manure frequently leaked off site into the Kidneys stream (no one living locally knew that its name on the map was Shire Lake Ditch), and the smell of it was even detectable on Iffley Road in a west wind.  One local resident remembers taking his cousin down there to see the pigs, the young girl screaming in horror when one of the pigs snatched a cockerel off a fence and swallowed it whole!  It was said that a century previously a drowning had taken place in the Kidneys of a coach and horses and the human occupants, while it was widely known that more recent tragedies had occurred there involving at least one child, and on other separate occasions a horse, a pig and a cow. All the local children in the 1940s and 1950s were warned very strictly to keep away from the Kidneys stream; between the rubbish and the pigs “you never know what you might catch”. The Kidneys stream was however remarkably rich in its population of newts, and the water meadows nearby were very well populated with grass snakes and frogs, and quite a variety of dragonflies.

In those days what is now the astroturf hockey pitch at the university sports ground was part of Long Meadow and regularly flooded in winter, becoming when frozen the university’s skating field.  The field under what is now St Mary and John Primary school (formerly Isis Middle) also flooded regularly and was used for skating.”

(1) According to the 1947 issue of Kelly’s Directory he lived at 20 Percy St, not Parker St.
(2) He was listed as a smallholder in Jackdaw Lane in Kelly’s Directory, as also was one William F. Jarvis, who lived at 77 Cowley Rd.
(3)“There was another scrapyard in Jackdaw Lane, off the Iffley Rd, they had wagons and skips, the owner back then [?1960s] was an old boy called Joe Trinder, he ran about in a beige roller and lived in Herschel Crescent, Litlemore, lots of dosh but apart from the Rolls a quite humble house. He enjoyed his pint with the lads of a Sunday lunchtime and was quite charitable to the local community” [from www.trucknetuk.com/phpBB/viewtopic.php?f=35&t=37772&start=210; downloaded 1/4/11; we have not yet established the date at which Trinder bought Cox’s field] .