If you’d like to contribute to our butterfly and moth observations for Aston’s Eyot, please fill in a butterfly checklist and send to us at info@friendsofastonseyot.org
We compile a monthly list as well as more detailed transect recording.

Aston’s Eyot and the Kidneys has a typical selection of butterfly species for woodland edge, grassland, and urban garden. A good place to see most species is along Plantation Path after midday, where the edge of the plantation creates a sunny sheltered spot.

The huge nettlebeds support the caterpillars of vanessid butterflies (Small Tortoiseshell, Comma, Peacock and Red Admiral), as well as many moths.   The Common Blue has become more frequently seen now its caterpillar foodplant (Birds-foot Trefoil) has been greatly increased by seeding it in. The Marbled White, not seen since the 1980s, was observed once more on the Kidneys in 2011; and has been seen in very small numbers each year since – we are planting to help it too increase in numbers. The Brown Argus has not been reported recently, perhaps because the short herb & grassy patches they favoured have been mostly replaced by nettles and other tall herbs.

Species to look out for:

Brimstone – Gonepteryx rhamni: hibernators fly late March & April, followed by the next generation from May through the summer. 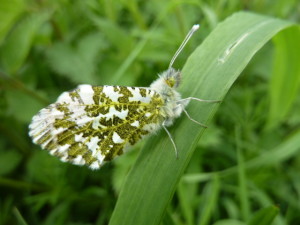 Orange Tip  – Anthocharis cardamines: hibernators emerge in April, followed by a brood in May-June. Uses Garlic Mustard as its foodplant on the Eyot.

Brown Hairstreak – Thecla betulae: overwintering eggs have been found on blackthorn; it should be on the wing in August & September.

Holly Blue – Celastrina argiolus: The first brood flies in April-May, the second in July-August. Caterpillars feed on Holly and Ivy.

Brown Argus – Aricia agestis: not reported since 1994, perhaps due to a lack of food plants for the caterpillar; flies in May-June & August.

Common Blue – Polyommatus icarus: A post-hibernation emergence in April is followed by a new generation in June-July.

Speckled Wood – Pararge aegeria: has a long season, can be seen from April through to October or even November.

Marbled White – Melanargia galathea serena: not seen since 1987 until 2011, Kidneys only.

Ringlet – Aphantopus hyperantus: on the wing in July & August

Many moths do fly by day – two species to look out for are:

Scarlet Tiger is a showy moth flying in June and early July. 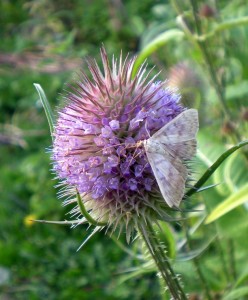 Mother of pearl moth on teasel