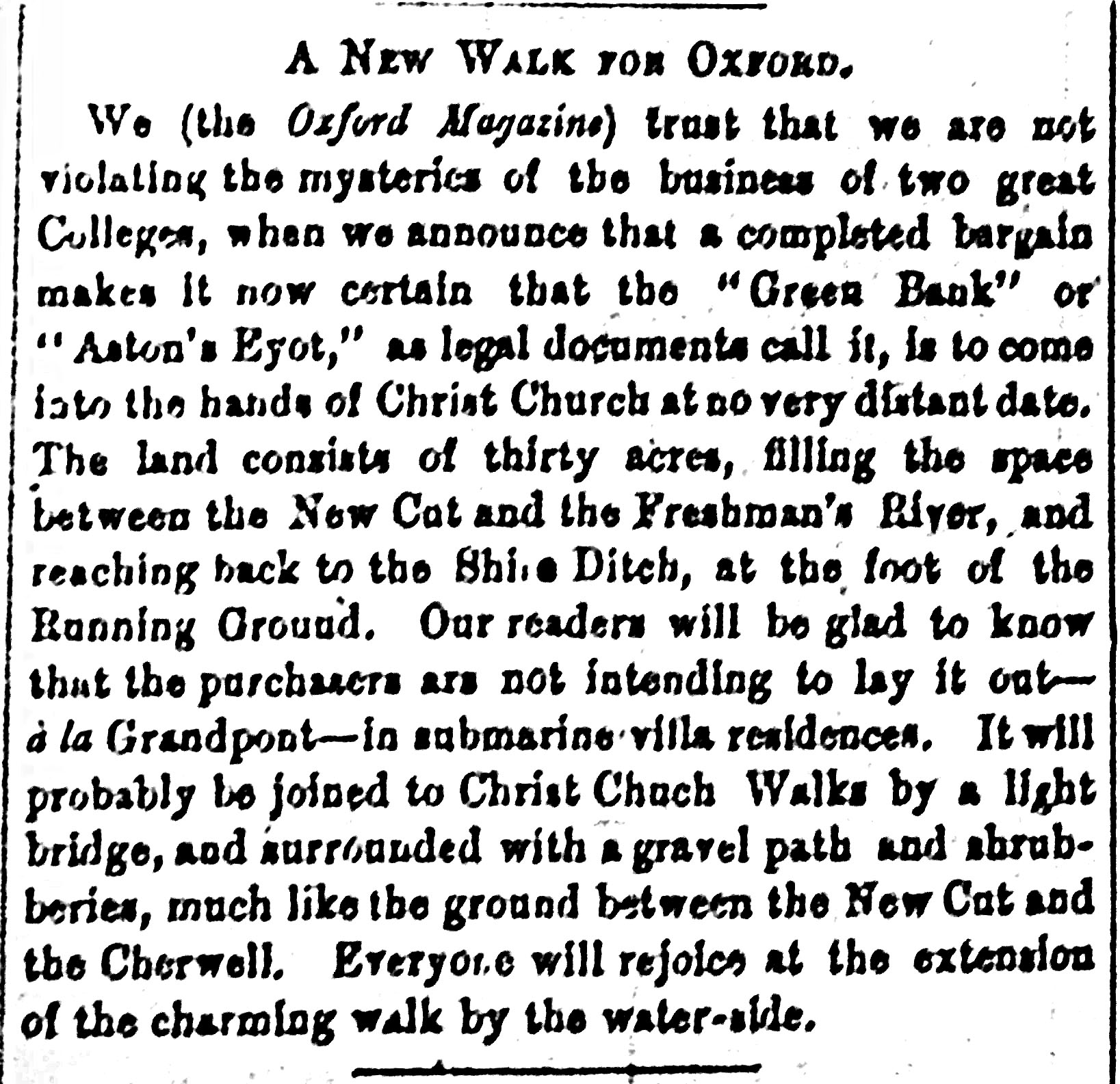 This article, from the Oxford Chronicle on 14th March 1891, reports the purchase of Aston’s Eyot by Christ Church.
Transcript below.

A NEW WALK FOR OXFORD.

We (the Oxford Magazine) trust that we are not violating the mysteries of the business of two great Colleges, when we announce that a complete bargain makes it now certain that the “Green Bank” or “Aston’s Eyot,” as legal documents call it, is to come into the hands of Christ Church at no very distant date. The land consists of thirty acres, filling the space between the New Cut and the Freshman’s River, and reaching back to the Shire Ditch, at the foot of the Running Ground. Our readers will be glad to know that the purchasers are not intending to lay it out – à la Grandpont – in submarine villa residences. It will probably be joined to Christ Chuch Walks by a light bridge, and surrounded with a gravel path and shrubberies, much like the ground between the New Cut and the Cherwell. Everyone will rejoice at the extension of the charming walk by the water-side.

First, they are won over by the beauty and variety of the habitats and wildlife so close to the centre of Oxford.
Next, if they are local, they wonder how it has taken them so long to discover this tranquil and relaxing spot.
Finally they ask themselves – what is an eyot and how is it pronounced – ay-ot, ay-ut, i-ot or ait.

The definition of eyot is easily answered – a small island in the middle of a river – and the term is particularly associated with the Thames. According to the Chambers dictionary, eyot is an alternative spelling of the more ancient word ait. ‘Ait’ is derived from the Old English egat or igeoth, apparently connected with ieg– an island. A walk in Aston’s Eyot doesn’t feel like a visit to an island but you do have to cross a bridge to get there and the map confirms that it is completely surrounded by water – the Thames to the west, the Cherwell to the north and Shire Lake Ditch to the east and south.

Less clear cut is the correct pronunciation of eyot. Chambers dictionary dodges this question, stating unhelpfully ‘the phonology is obscure’. Many people feel that it should be pronounced in the same way as its ancient predecessor, ‘ait’, i.e. ‘eight’. Rowers tend to prefer ‘eight’, with Chiswick Eyot/Ait getting a mention every year during the Oxford Cambridge boat race.

Perhaps the best compromise between history and the intuitive pronunciation of the modern ‘eyot’ spelling  would be ‘ay-ut’. Other sources allow for  ee-ot, ee-ut, i-ut or i-ot so really it’s up to you.

Plant with a History – Hoary Cress

This is a story about the history of a plant and of human failings, and if anyone of our readers chance to be related to anyone named in this story, please accept my deepest apologies for any offence I may have caused. On the other hand, any naval or military historians among our readership may wish to offer comments, enlightenment or correction. My resources in researching the story have been limited more or less to books that happen to be on our bookshelves.

Richard Mabey, in his ‘Flora Britannica’, recounts a story that he heard from Doris Thompson of Ramsgate, Kent, about a plant known locally as ‘Thanet Weed’. This is Hoary Cress, Lepidium draba.

You may have noticed its drab, grey-green leaves and small clusters of white-flowers growing beside the paths on Aston’s Eyot. Doris Thompson’s account runs as follows.

‘This plant was first recorded here in the early nineteenth century, introduced after the battle on the Island of Walcheren in the Napoleonic wars. The soldiers, stricken with fever, were brought to Ramsgate on palliasses stuffed with hay which was later given to a Thanet farmer, who ploughed it into his fields as manure.’ Now, you may be thinking, the sequel to this was an outbreak of dysentery, which was indeed the cause of the fever, on the Isle of Thanet. More research may be needed on this score. But in fact her account continues ‘The cress then appeared in great quantity and spread over Thanet and now grows along the south coast.’

Francis Rose’ Flora makes the same link between the plant and the 1809 Walcheren expedition. As I watched the way in which Thanet Weed proliferated on the Eyot this year, I took to wondering about the Walcheren expedition, about which I knew nothing at all. The following account is put together from the limited resources mentioned above.

I started with the 1868 edition of Haydn’s Universal Index of Biography, from which I quote.

‘WALCHEREN (an island at the mouth of the Scheldt, Holland) The unfortunate expedition of the British to this isle in 1809 consisted of 35 ships of the line, and 200 smaller vessels, principally transports, and 40,000 land forces, the latter under the command of the earl of Chatham, and the fleet under Sir Richard Strachan. For a long time the destination of the expedition remained secret; but before 28 July, 1809, when it set sail, the French journals had announced that Walcheren was the point of attack. Perhaps a more powerful and better appointed armament had never preciously left the British ports, or ever more completely disappointed public expectation. Flushing was invested in August; a dreadful bombardment followed, and the place was taken 15 August; but no suggestion on the part of the naval commander, nor urging on the part of officers, could induce the earl to vigorous action, until the period of probable success was gone, and necessity obliged him to return with as many of the troops as disease and an unhealthy climate had spared. The place was evacuate, 23 December, 1809. The house of commons instituted an inquiry, and lord Chatham resigned his post of master-general of the ordnance, to prevent greater disgrace; but the policy of ministers in planning the expedition was, nevertheless, approved. The following appeared at the time:-

This may all sound bad enough, but from Elizabeth Longford’s ‘Wellington, the Years of the Sword’ I learned that Canning’s intrigues against Castlereagh, whose brain child the expedition had been, led Castlereagh to challenge Canning to a duel on Putney Heath. Castlereagh wounded Canning in the thigh, and Canning shot a button off the lapel of Castlereagh’s coat. Kitty Wellesley wrote in her journal‘ every proof of discord in our governors affords a triumph to our enemies, and he who exposes such discord acts as an enemy to the country.’

My sources for a continuation of the background to the history of the arrival of this plant in Oxfordshire are limited, but if the story should prove of interest, a further instalment may follow in due course. Any reader better qualified than me to elaborate on the military strategy might like to submit an account to the editor for consideration for the next edition of the newsletter.